We extended the capability of a single massive-training artificial neural network (MTANN) and developed a multiple MTANN scheme (multi-MTANN) for further removal of false positives (FPs) in computerized detection of lung nodules in low-dose CT. The multi-MTANN consists of several MTANNs arranged in parallel. Each MTANN is trained by use of the same nodules, but with a different type of non-nodule (i.e., FP). Each MTANN acts as an expert for a specific type of non-nodule, e.g., five different MTANNs were trained to distinguish nodules from various-sized vessels; four other MTANNs were applied to eliminate large vessels in the hilum, vessels with some opacities, soft-tissue opacities caused by the partial volume effect, and some abnormal opacities. The outputs of the MTANNs were combined by use of the logical AND operation such that each of the trained MTANNs eliminated none of the nodules, but removed some of the various types of non-nodules. In the output images of the trained multi-MTANN, three major types of nodules, i.e., pure ground-glass opacity (p-GGO), mixed GGO, and solid nodules, are represented by light distributions, whereas various types of non-nodules are mostly dark. The trained multi-MTANN was applied to the reduction of FPs reported by our computerized scheme for lung nodule detection based on a database of 63 low-dose CT scans (1765 sections), which contained 71 confirmed nodules including 66 biopsy-confirmed primary lung cancers, from lung cancer screening. The multi-MTANN was applied to 58 non-training true positives (54 patients) and 1726 FPs (non-nodules) reported by our scheme in an independent test; these were different from the training set. The results indicated that 83% (1424/1726) of non-nodules were removed with a reduction of one true positive (nodule), i.e., a classification sensitivity of 98.3% (57/58). By use of the multi-MTANN, the false-positive rate of our original scheme was improved from 0.98 to 0.18 FPs per section (from 27.4 to 4.8 per patient) at an overall sensitivity of 80.3% (57/71). 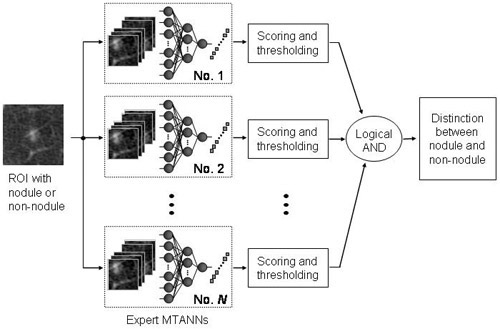 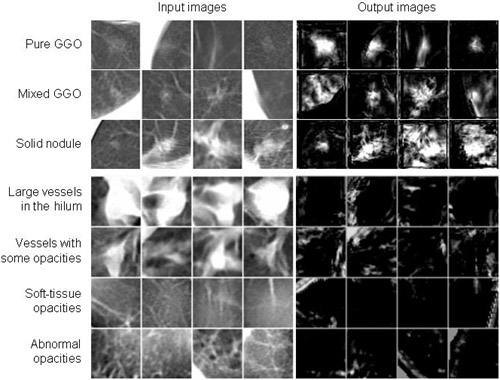 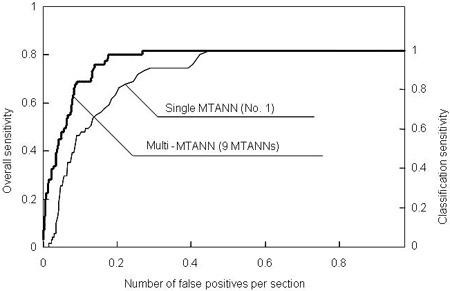 FROC curves of the single MTANN and the multi-MTANN consisting of nine MTANNs for the test set consisting of 57 true positives (nodules) and 1726 FPs (non-nodules) in an independent test.